Inside the USS Zumwalt

The USS Zumwalt is a 600 foot, 16,000 ton stealth destroyer of the US Navy. It is the most technologically advanced surface ship in the world. 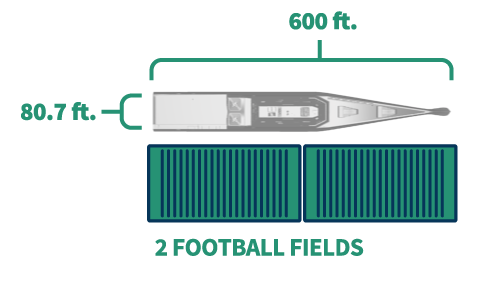 The two electric motors can propel the ship at 30 knots, or about 34 mph. 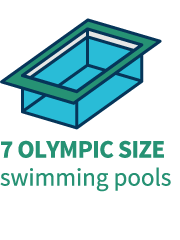 In the water, the Zumwalt diplaces 17,534 tons of water; equal to 613,690 cubic feet of water, the water displaced could fill seven Olympic swimming pools. 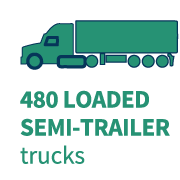 The ship weighs in at 16,000 tons, which is equal to about 480 loaded semi-trailer trucks. 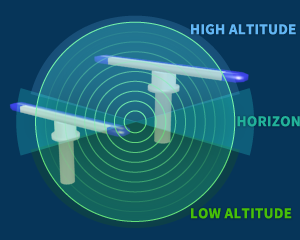 Hull-mounted sonar detects underwater mines or submarines, and contributes to a 3D, 360-degree view for the ship’s defense systems. 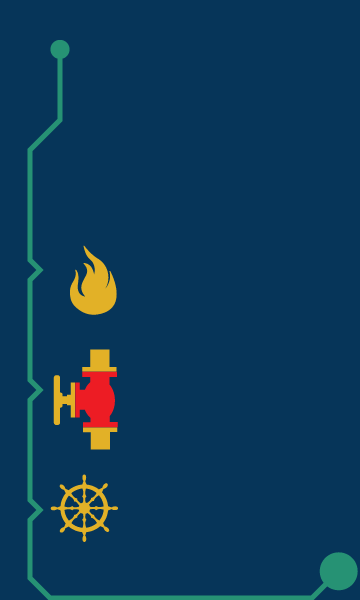 16 EMEs (Electronic Modular Enclosures) contain Commercial-Off-The-Shelf (COTS) servers and centralize all onboard computing. Each EME is 3360 cubic feet and supplies power and cooling to the servers.

It also protects the server from shock, vibration, and outside electronic intrusion or interference.

The servers, or Total Ship Computing Environment Infrastructure (TSCEI), run on various forms of Linux, with 6 million+ lines of code to read and control ship functions. This allows automation of important functions, such as: 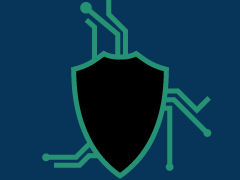 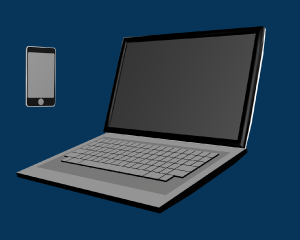 and the computer displays the information that sailor is permitted to access.

In addition to the centralized computing in the ops center, issued laptops can be used almost anywhere on the ship. NCOs (non-commissioned officers) and above are also issued cell phones. 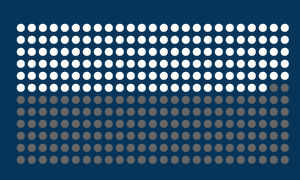 Automation reduces how many crew members the ship needs; using only 148 crewmen as opposed to about 300.

30mm close-in guns protect the ship from small, fast boats and are accurate up to two miles.

AGSs are 155mm cannons that fire rocket-assisted, GPS-guided rounds. These systems can hit within 30-inches of a target at 72 miles (like hitting the bullseye on a dart board from 5 miles away). Auto-feeding, "infinite magazines" are reloadable during operation.

ESSMs (Evolved Sea Sparrow Missile) are nimbler than the SM-6, and are used to track and destroy enemy missiles and rockets.

Tomahawk missiles are used for sea-to-land operations. GPS guidance makes them accurate up to 1,550 miles (roughly the distance from New York City, NY to Denver, CO). 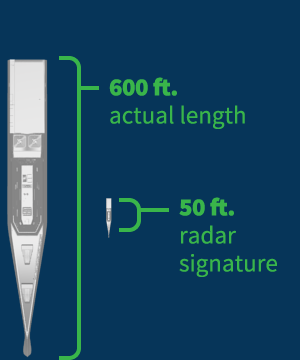 The ship is shaped to reflect radar signals away from the source. This style of construction reduces both the radar and infrared signature to that of a 50-foot vessel.

The superstructure is made from sandwiched composite materials of balsa wood and carbon fiber, and is EMC (electromagnetic compatibility) shielded.

The tumblehome hull tapers upward toward the deck, placing the bulk of the hull near the water line.

This increases stealth capability by blending the hull with the surface of the water, limiting deck surface above water, and decreasing wake.

The flight deck is large enough to accommodate operations of F-35 and MV-22 Osprey aircraft.

The hangar has enough space to house two Sikorsky helicopters, or three UAVs (Unmanned Ariel Vehicles). Automated systems secure the helicopters, and move them between the hangar and the flight deck.

An extra diesel generator provides emergency power if the main and auxiliary turbines are damaged.

Five separate generators provide power for the electrically-driven Zumwalt. Generated power flows through the central system, and gets distributed to the drive motors, weapons, and EMEs.

Jet engines run generators that produce power for the ship. Each turbine is capable of 38 megawatts of power – enough to power over 6,000 homes. RPM, temperature levels, and amount of power produced are monitored and adjusted automatically for what the ship needs.

Two electric, Advanced Induction Motors (AIM) connect directly to the propeller shafts without transmissions or complicated gearing. Electric motors provide maximum torque from 0 - 18,000 RPMs, and can be 90% efficient, only losing 10% of their energy to heat or friction. 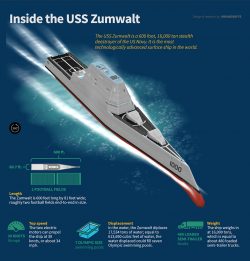 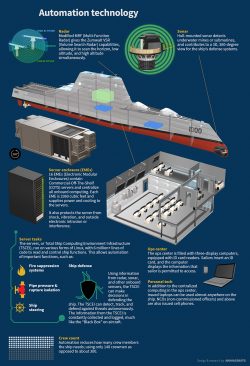 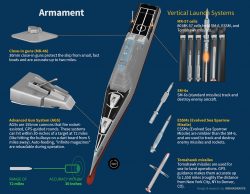 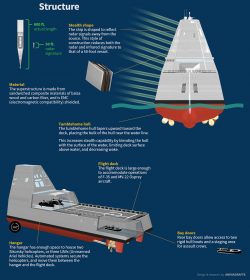 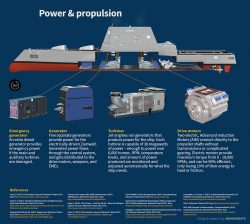